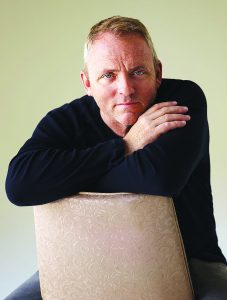 Controlling the brain. It’s a skill one of FIU’s most famous authors has yet to master. But, it’s a skill he might not want to master. The stories that have made him an award-winning novelist and screenwriter are all woven from the chaos in his own mind.

“I don’t know what goes on in my head, and I don’t want to know,” said Dennis Lehane MFA ’01. “I just know I write a beginning, a middle and an end. I don’t deal with certain details until the end.”

In a career spanning 25 years, Lehane has published 13 novels. Five of his mystery and crime thrillers — “Mystic River,” “Gone, Baby, Gone,” “Shutter Island,” “The Drop” and “Live by Night” — have been adapted into major motion pictures. Lehane has written for the HBO series “The Wire” and “Boardwalk Empire,” as well as the TV series adaptation of Stephen King’s “Mr. Mercedes.” And he has taught classes at Harvard University and Eckerd College, where he earned a bachelor’s degree in creative writing in 1988.

Today Lehane and his family live in Los Angeles. His most recent novel, “Since We Fell,” a psychological thriller written from a woman’s perspective, was published in 2017, and he is working on the screenplay for its movie adaptation. But before Hollywood came calling, Lehane was working hard to become a writer.

“Plans are just dreams until they’re executed.” —Live by Night

Lehane grew up in Boston’s historic Dorchester neighborhood, the son of a foreman and school cafeteria worker. His parents wanted him to pursue a career as a utility worker or letter carrier. “I’m only good at one thing and that’s making stuff up,” Lehane admitted, so he headed for Eckerd College in St. Petersburg and a few years later enrolled at FIU to pursue a master of fine arts in creative writing.

Housed in the College of Arts, Sciences & Education, the Creative Writing Program trains writers across genres — fiction and creative non-fiction, poetry and screenwriting — to hone their craft, publish and connect with their intended readers. Graduate school fed Lehane’s craving for collaboration, feedback and hard deadlines. He was living the writer’s life.

“You get to hide from the world, not grow up, and spend time with like-minded geeks who talk about writing,” Lehane said. “Those aren’t conversations you get to have regularly.”

At FIU, he met Professor Lynne Barrett, a short story writer and editor. She taught him how to hone narrative structure, or the framework that gives order to a story. Known for his gripping storylines, unforgettable characters and witty dialogue, Lehane admits that putting it all together in a way that makes sense for readers never came naturally to him. “Lynne gave me a strong sense of structure,” Lehane said. “I learned almost everything I know about plot from her. I have to remind myself that’s why people read. But it’s not why I write.”

Lehane also found a mentor in Professor John Dufresne. “That’s the guy,” Lehane recalled of The New York Times notable book author who wrote, taught classes at FIU, led workshops in the community, and still had time for graduate students to bang on his door at 10 p.m. to talk about the craft of writing. “I wanted that, I wanted to be that. He embodied my ideal of a writer. He lived and breathed the craft, ate and drank it, ordered it for dessert.”

Dufresne knew the budding author would be successful in his own right — he had talent, ambition and grit. Dufresne and his wife regularly hosted get-togethers for young FIU writers in their home. During those gatherings, Lehane was usually the guy at the kitchen table working away on his laptop.

“He was obsessed. He would just write, write, write,” Dufresne said. “He knew what he wanted, but he also listened. He wanted you to tell him what worked and what didn’t.”

Ready to graduate, Lehane submitted his master’s thesis in 1994. The series of short stories were fantastic, according to Dufresne, all except for one that lacked a complete plot. Knowing he could do better, his professors asked him to work on it. “It will only take you a few weeks to fix it,” they advised him. Seven years went by. During that time, Lehane published his first novel, “A Drink Before the War.” Four others followed.

Then Lehane finished his most acclaimed novel to date. Having scrapped his 1994 thesis, he returned to FIU with a gripping crime thriller instead. “Mystic River” was born from the incomplete short story that had stalled him years earlier. It was published in 2001, the same year Lehane —finally — earned his MFA.

“There are threads in our lives. You pull one, and everything else gets affected.” —Mystic River

When Lehane was at FIU, Miami was a hotbed for crime and suspense stories. Novels by Edna Buchanan, Carl Hiaasen, Elmore Leonard, Les Standiford (director and founder of FIU’s Creative Writing Program) and James W. Hall (a former FIU faculty member) flew off bookshelves. But Lehane didn’t want to write about South Florida. He felt like a tourist and didn’t understand it the way the others did. He understood Little Havana, a working-class neighborhood home to exiles and immigrants. It reminded him of growing up among mixed communities of African, Asian, Caribbean and European families. No matter how hard he tried, he couldn’t connect to Miami outside of the Cuban culture he responded to. This drove him back toward writing about the world he had grown up in.

Dominating Lehane’s creative works are questions of race, class and economics. His popular appeal and literary excellence earned him the 2018 Lawrence A. Sanders Award for Fiction, which is presented annually by FIU’s Creative Writing Program. Lehane is the first FIU alumnus to earn the award, and he stands in good company. Past recipients include literary luminaries Scott Turow, Isabelle Allende and Amy Tan, among others.

“The foundation of your life is luck. Hard work and talent make up the difference.” —Live by Night

“Dennis knows how to tell a gripping story, but those stories are grounded in characters that people care about. The issues at the heart of things are as profound as anything you’ll find in contemporary literature,” said Standiford. “I tell my students there’s a formula for success in writing: 25 percent is talent, 25 is hard work, 25 is persistence and 25 is luck. Dennis has done so well on the first three counts he made his own luck. His dedication and hard work are truly phenomenal.”