–By Angela Nicoletti for FIU News

Reyna Noriega chases after the little glimmers of joy in life. And she puts them in her art.

Her illustrations are full of soft lines, gentle curves, and vivid hues of deep redish orange, teal and green that seem to breathe and move. Women of color are the focus of many of her pieces. The women all exude power, grace, strength, beauty. They are Noriega’s way of capturing and sharing joy with others, especially the women who see themselves reflected in her art.

The FIU alumna — fulltime artist and author — has perhaps shared more joy in the past year than she could have ever dreamt possible. At just 28-years-old, Noriega has been a cover artist for The New Yorker and Science Magazine. She also designed a special edition t-shirt with Old Navy.

A little over year ago, though, Noriega’s life looked a lot different. She had just taken a leap of faith, becoming a fulltime freelance artist after years of working different jobs. 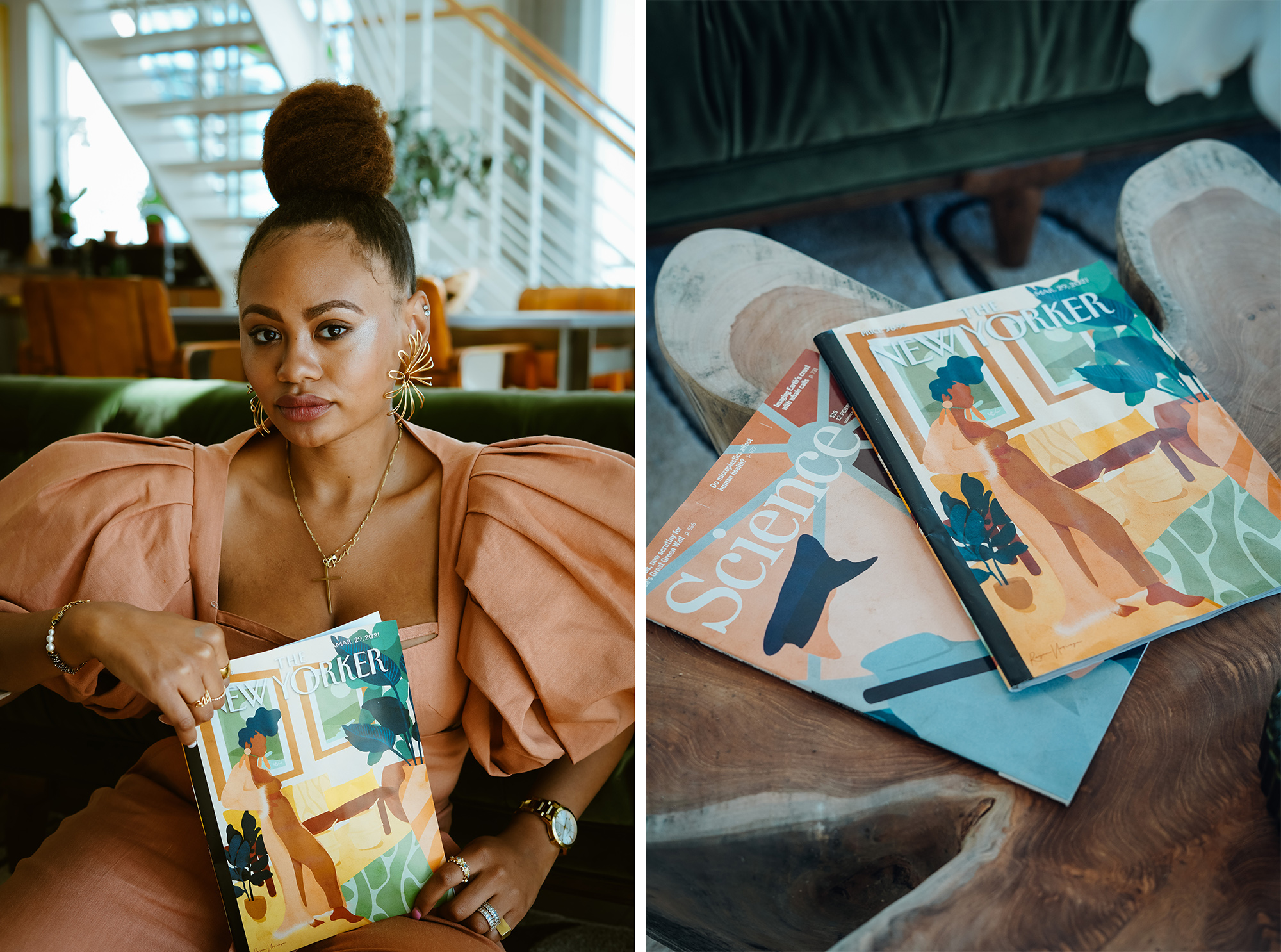 Noriega’s path has been full of exploration, what she calls “following the feeling.” She graduated from FIU with a diverse set of skills — majoring in psychology with minors in English and art. She says she’s always carried with her everything she learned at FIU, that it’s helped at every stage of her journey — when she was an art teacher at Everglades Preparatory Academy in Homestead, a creative director for a startup, and, even now, when she’s working with clients.

Those first few months of freelance life were hectic. Noriega took on as much work as she could. She designed album covers, posters, logos. Sold prints of her paintings and illustrations. Attended different speaking engagements and networking events. She was also working on her second poetry collection In Bloom.

During this time, Noriega’s dog — a white schnauzer named Pepper — had four puppies. She took it as a sign to slow down. Pause. Noriega told her friends that if they wanted to see her, they could come over and pet the puppies, but she wouldn’t be going out or leaving the house.

From this time of birth came another type of birth and new beginning for Noriega’s art.

“In those moments of stillness and reflecting, I was thinking about what type of art I want to create — how I could put my vision and my own self into my work in a way that other people would benefit from,” Noriega said.

When she wasn’t caring for the puppies, she was painting. Without all of the noise and busyness of life, Noriega’s new unique, unmistakable style emerged.

“A big part of my work stems from not seeing enough images of women of color in museums or galleries — or thinking back to when I have seen then and what messages they portray. Mostly, they are depicting the struggle and trauma — women carrying the world on their back,” Noriega said. “I wanted to create something where we feel empowered, beautiful, elegant and to celebrate the softer sides of ourselves.”

With this fresh start, Noriega wanted to take the next step. A really bold one.

She bought a plane ticket to Paris. On March 16, 2020, she was going to leave Miami for six months. She planned to travel across Europe while expanding her art career.

The timing seemed perfect. The lease was up on her apartment. The puppies had gone to good, loving homes. Then, the pandemic sidelined her plans. With nowhere else to go, Noriega moved back into her parents’ house.

A few months later, however, it was as if everyone knew her name. Everything she expected to happen to her career while she was in Europe, ultimately ended up happening — in its own way and on its own time.

A push to support and uplift Black artists came following the death of George Floyd at the hands of police in Minnesota. Noriega’s work garnered widespread recognition. She gained thousands of new followers on social media. Companies wanted to work or collaborate with her.

But, even with all of the success — the very thing she’d been working toward for years — she couldn’t shake the heaviness of life. She was wrestling with so many conflicting, difficult feelings.

“There was the uncertainty of the pandemic. There was the reminder of the state of racism in America — and how we haven’t fully reckoned with it as a society,” Noriega said. “Everything was just so traumatizing.”

Through it all, though, Noriega did what she’s always done. She kept drawing and painting. She continued creating. She searched for joy — to bring it to others through her art when they really needed it the most.

“Happiness is everyone’s birthright. I believe you will be more successful when you’re in alignment with what passions are and what you’re good at,” Noriega said. “That starts with constantly feeding your interests and investigating things that bring you joy — and then going closer to those things.”