Hidden in a back alley in the heart of Little River – just north of Little Haiti – is an inconspicuous venue,  surrounded by abandoned buildings and easy to miss.

If you do happen to walk by and notice a fire-escape staircase that leads to a crimson door, you’ll discover one of the Miami comedy scene’s best-kept secrets – Villain Theater.

“It takes work to get here and watch a show, and we wear that as a badge of honor – they wanted to be here and they keep coming back,” says Peter Mir ’12, co-founder of Villain Theater and an FIU alumnus. “They were willing to try something that wasn’t just new, but that was almost a secret.”

Since the group held its first show in August of 2015, fans have continued to find their way to this small community improv theater week after week. The Miami New Times named it “Best New Theater” in its Best of Miami 2016 issue earlier this year, noting the theater surpasses “what most comedy clubs in our city can offer in both quality and quantity.”

“There’s something sacred about theater. It’s quiet and dark and we have a little bit of that,” Mir says. “But we want to show that other aspect, too, where you are seeing something live and living and won’t be anywhere else.”

The theater’s dark, intimate space would feel like a villain’s lair with its black-painted walls and dim red lighting if not for the up-beat music and lively conversations among patrons that gather in the lobby in anticipation for a show. Their chit chat is interrupted by the dimming of the lights to signal the performance is about to start. The music swells, the actors enter from backstage and the laughter begins.

“It’s all improvised so the actors are experiencing everything for the first time along with the audience,” Mir says. “It’s always something new.” 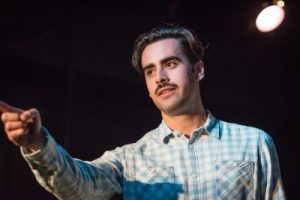 Mir’s first brush with improv came during his first semester at FIU in the fall of 2004 when he joined an improv comedy group founded by FIU students called “Impromedy.”

The following spring, he applied to become a theatre major at FIU and stuck with Impromedy.

“At FIU, I learned that theater wasn’t just about performing. It takes a community,” Mir says. “I didn’t just learn how to be a performer. I learned how to run lights, how to build sets, how to manage shows. We want our actors to be able to do all those things, too.”

The dozens of performers at Villain Theater come from a variety of different backgrounds and professions – from trained actors to students, lawyers, real estate agents and teachers.

The diversity reinforces the founders’ core philosophy that “improv is for everybody,” allowing people from all walks of life a chance to reconnect with something they lose touch with as they grow older: their creativity.

“Whether you are a lawyer talking to a judge or new mom trying to learn how to be a parent, you’re improvising in some way, shape or form everyday,” Mir says. “Everyone has creativity. It’s really about learning to trust yourself and allowing that creativity to flow. It’s about learning to trust your creative choices and that of those around you.”

In 2015, one of Mir’s performance partners from Impromedy, Jeff Quintana, returned to Miami after spending several years performing improv in Chicago and approached Mir about opening a theater in Miami.

The name, Villain Theater, was Quintana’s idea. The improv group he was a member of in Chicago was called “Villain.” The word villain wasn’t always synonymous with criminals and shady characters with bowler hats and handlebar mustaches. The word is derived from the Old French “vilain,” which meant “peasant, farmer or commoner.” It was often a derogatory term used by the elites of the day when referencing members of the lower levels of feudal society.

“Something happened there. When did the villager become the bad guy?” Mir says. “We want to be a theater for the people and by the people. We’re not exactly Shakespearean in our product. And if we’re looked down for it, that’s okay. We don’t mind being the villain. That’s who we are.”

Villain Theater opened in May 2015 with a group of eight students called the “First Villains.” Many of them FIU actors who went through an accelerated version of the theater’s training program to perform in the inaugural show. The program included improv foundations, scene work, sketch writing, weekly performances and how to craft an entire improv show from scratch.

One of those First Villains was Jannelys Santos ’14, who graduated from FIU with a bachelor’s in theatre. Santos has been acting since she was 15, but like most of her fellow members in that initial group she was accustomed to scripted work and had never performed improv before. 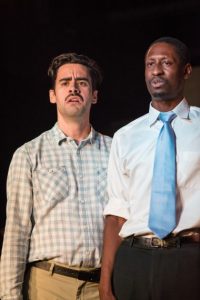 “With improv, you’re creating your own material and you can be whoever you want to be,” says Santos, who is now the theater’s managing director. “In regular acting, you have your script and you usually only have one role. You speak the words and give them life. But with improv, you have to be the actor, the writer, the director and the choreographer all in one.”

The theater now boasts approximately 30 regular performers, three improv ensemble teams and 160 students and alumni. They’ve gone from shows on one night a week to shows on Thursdays, Fridays and Saturdays.

Miami’s comedy scene has struggled, with only a handful of clubs in the city providing entertainment for comedy fans and opportunities for actors to perform on a consistent basis. Mir and Quintana want to help fill both those gaps.

“We don’t want there to be a talent drain in Miami. We feel it’s an amazing city with incredibly talented people who feel the urge to go to other cities to get opportunities,” Mir says. “We want to provide an opportunity for these Miami voices, and we give our actors a chance to perform every week.”

In the coming months, Villain Theater will move to a new, more visible venue on the corner of Northeast 2ndAvenue and 59th Street in Little Haiti – 30 blocks south of their current location.

With a larger stage, higher visibility and closer proximity to Wynwood, Mir hopes Villain Theater will become even more accessible to more fans.

For more information on Villain Theater and its new venue, go to VillainTheater.com.