Are you following your heart? Are you fulfilling your purpose? If not, what is holding you back? Johanna Salazar ’10 shares her inspiring journey of self-discovery while learning to look at everything through a lens of empathy and gratitude.

Born in Colombia, Johanna and her younger sister were raised by their fiercely independent grandmother, Aceneth. Their grandmother often helped people in town, serving as a resource within the community and teaching life skills to those in need. This experience was pivotal in shaping Johanna’s values and beliefs, offering her a glimpse into entrepreneurialism and the concept of living and leading with a grateful heart. “A sense of service was always part of my upbringing,” she says.

“My mom left us when we were 4 and 5,” says Johanna. “She came to the US as an undocumented immigrant, in search of opportunities for herself and for her children. She was a cleaning lady, and did this work until she was able to raise the money needed to have my sister and me join her in New York. My mother wanted to give us a better life than what she was able to have herself.”

When she was older, Johanna began cleaning houses with her mother. One day while cleaning, Johanna told her client that she was searching for internship opportunities with Telemundo. He offered to get her in touch with someone at Viacom, and she soon landed an internship at MTV, which led to a full-time position.

In 2005, while on a lunch break at Barnes and Noble, Johanna discovered a book entitled “How to Change the World: Social Entrepreneurs and the Power of New Ideas.” Something clicked. Johanna was inspired and began asking herself, “How can I become successful while finding my purpose?”

By 2008, after seven years at Viacom, Johanna was ready for change. “I was climbing the ladder, I had the benefits, I had everything,” she says. “But I decided to give it all up because I didn’t feel truly fulfilled.” Determined to find her purpose, Johanna left the comfort of her home and career behind to start anew.

Intending to study law, Johanna left New York to visit the FIU law school. As fate would have it, she walked through the business school to get there. Full of ambition, Johanna had already started her first company, and her goals began to shift; she now wanted to learn how to create and run a successful business. But even more importantly, she was determined to find her passion and create impact through media. Of the business school, she says, “I was very curious. I loved the vibe and started doing some research. I realized that was where I wanted to be.” 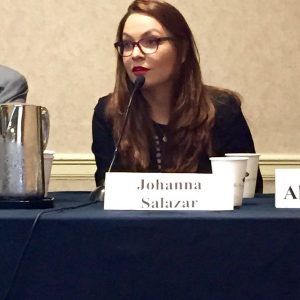 Once enrolled at FIU and working toward her MBA, Johanna says, “I felt like a kid in a candy store. My first class was a legal business course, which was awesome since I had originally wanted to go into law. It was an affirmation that I was in the right place, doing the right thing.”

Johanna co-founded the Miami chapter of Young Women Social Entrepreneurs in 2010, always looking for ways to give back. In 2012, Johanna helped launch a premium YouTube channel, 123UnoDosTres, for a Hispanic audience. As the channel head, she was in charge of the production and programming. Johanna worked as part of a small team of passionate visionaries looking to produce premium content for the online market.

Johanna also started Grateful Group, along with three cousins; a company dedicated to bringing beautiful products to today’s empowered women. With their values deeply rooted in family, empowerment, creativity and innovation, the women donate a percentage of their profits, time and resources to organizations and charities that are aligned with their core values.

Johanna is one of those people that you just want to know. You can feel the warmth and positivity in her voice and see it in her smile. Her greatest satisfaction comes from “empowering people and helping them find their voice,” she says. “I had the courage to have a dream, identify my purpose and create a plan of action to make it happen. We each have the power to create and inspire, and that is what I try to do every day.”

Seven years later, Johanna was asked to come back to Viacom to manage a project. She went back and never left. With new insight and a team that fosters creativity and encourages her to think outside the box, Johanna is now the Vice President of Production Planning and Operations at Viacom. She oversees the Content Management & Production Technologies department working with MTV, VH1, LOGO, Comedy Central and Spike.

Johanna isn’t stopping there. She’s also started another company called Media Disrupters (MD). At MD, she works as a media strategist, helping companies achieve the strategic goals that impact their bottom line while preparing them for their future in a media-driven world.

Johanna’s advice for students and young alumni is invaluable: “It’s not just about what you can get out of your relationships and connections,” she says, “but what you can give, how you can add value and contribute to these relationships. Being part of the FIU Alumni Association means you have a network for life, full of opportunities to collaborate and co-create. Stay connected and become as involved as possible. While you’re building your network, keep relationships alive outside the classroom. Ask yourself, “What value can I contribute to this relationship to be remembered?”