Adam Silvia MA ’09 starts work this week at the Library of Congress in D.C. 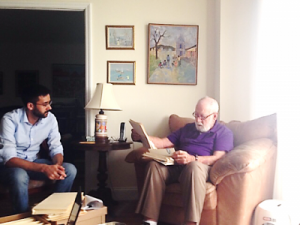 Five years spent archiving centuries of Haitian history may have helped with his application.Just a day after he graduated from the Steven J. Green School of International and Public Affairs with a Ph.D. in history, Adam Silvia MA ‘09 started a new job with the United States Library of Congress in Washington, D.C.

Silvia, who wrote his dissertation on Haiti, created a digital archive, Haiti: An Island Luminous, that combines rare books, manuscripts and photographs from libraries and archives in Haiti with commentary by more than 100 scholars from 75 universities around the world.

Funded by a grant from the Green Family Foundation, with additional support from the Kimberly Green Latin American and Caribbean Center, the site is hosted by FIU Libraries on the Digital Library of the Caribbean (dLOC)- a cooperative between FIU, the University of Florida and more than 20 institutions in the Caribbean.

Translated to French and Haitian Creole by professors at the l’Université d’Etat d’Haïti, the site walks users through the complex and often misunderstood history of Haiti, from the Taino Indians who first inhabited the island to the devastating earthquake that killed and injured hundreds of thousands of people in 2010.

Silvia, who traveled to Haiti for his research, completed the project this summer.

He said the vision behind the project was not only to build a publicly available resource but also to apply technology in a way that would make what he calls the “historical assembly line” more transparent.

“When you visit the website, you can look at the sources that archives chose to scan, you can observe how historians, past and present, interpreted those sources and you can see how those perspectives were woven into one seamless narrative,’’ he said. “It’s a multidimensional history.” 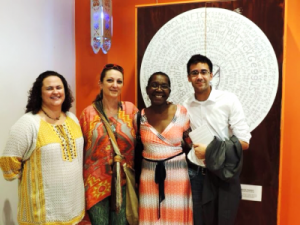 At a launch event for the project in 2011, Kimberly Green, president of the Green Family Foundation, said the project would become a “vital platform highlighting Haiti’s rich cultural heritage and contributions to the world stage.”

“We are proud to partner with FIU to establish institutionalized memory, and, in working with Haitians, to ‘build back better’ through cultural competency and elevating the importance of Haitian patrimony,’’ said Green, an award-winning documentary filmmaker who directed and produced the film, “Once There Was a Country: Revisiting Haiti,’’ narrated by Maya Angelou.

In 2014, Silvia curated a physical exhibition of the project at the Green Library that included copies of rare books, manuscripts, newspapers and photos, each piece accompanied by sources and commentary.

Plans are in the works to unveil An Island Luminous at the Haitian Studies Association annual conference in Haiti in November, said Miguel Asencio, director of the Digital Library of the Caribbean.

“This is one of the reasons why dLOC exists – to create an effective academic environment so that our students can succeed,’’ he said. “The collaboration between many different organizations and across borders – our Caribbean partners, other universities and the Green family – are proof of what is possible when a community works together toward shared goals. We continue to develop these partnerships to inspire others to follow Adam’s great example.”