The live comedy scene in Miami has undergone a major transformation with the recent addition of Villain Theater – a new Chicago-style improv theater in the blossoming arts district of Little Haiti. An enthusiastic audience of FIU alumni, students and staff had an opportunity to witness this first hand at a special FIU Alumni Night hosted on Saturday, July 16.

Villain’s large cast of improv artists, the vast majority of whom have deep ties to FIU, delivered a night full of fun and laughs. The evening was broken up into different segments featuring “improv teams” with short breaks in between for the audience to mingle and get drinks. The main events of the evening were Villain’s signature segments, Tales from the Magic City and the Miami Noise Machine. 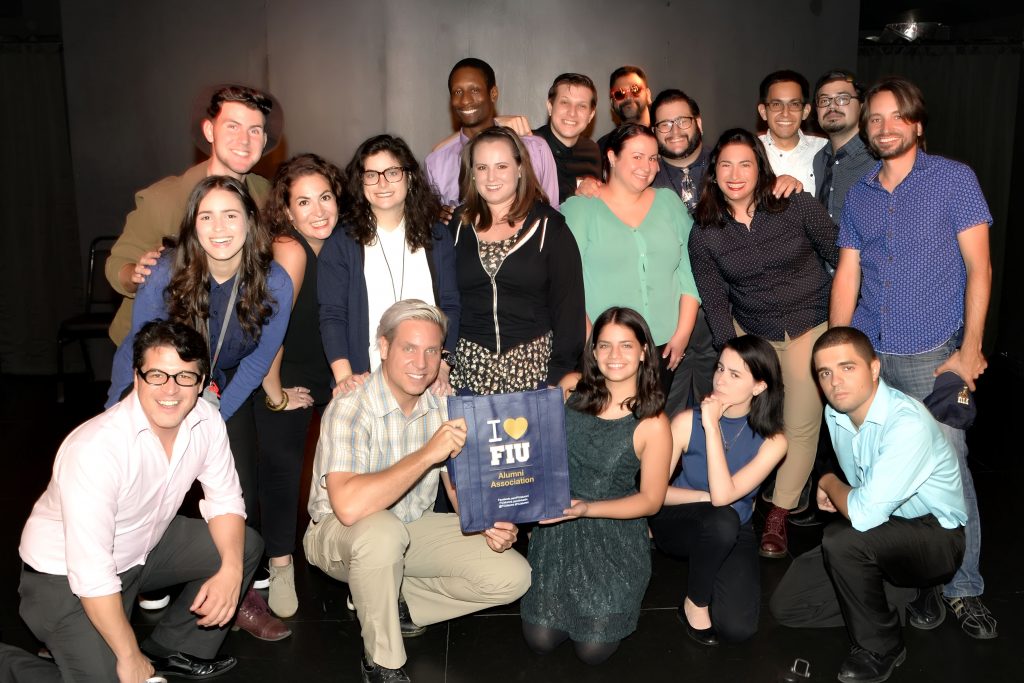 Every Saturday, Villain invites a Miami “celebrity” to hop up on stage for Tales from the Magic City and share some real life stories. The improvisers then use those stories as inspiration for a series of improvised scenes. This week, FIU alumnus and current faculty member in the Department of Theatre, Ivan R. Lopez, took the stage to share some stories from his time at FIU. The cast, comprised primarily of FIU alumni, then riffed on those stories for 45 minutes. Peter Mir, Jeff Quintana, Jannelys Santos, Patrick Rodriguez, Melanie Menendez, Michael Schiavinato, Juan Espinosa and Maria Tomaino flowed in and out of scenes and characters with great ease – all of it being developed in the moment and based on whatever inspiration they were getting from each other.

Later in the evening, Peter, Jeff and Jannelys were joined by another FIU alumnus, Mabel Mir, for the Miami Noise Machine – an improvised musical. After receiving a suggestion of a title for a musical (in this case: “Froyo Date”) the four improvisers created a full half-hour musical on the spot. At certain points during their improvisation, the organist, current FIU Theatre student Ryan Bauta, would play a song and the improvisers would come up with the lyrics off the top of their head, all while moving the story forward to a logical conclusion.

If you missed this special FIU Alumni Night, have no fear. Villain Theater has brand new improvised shows every Thursday, Friday and Saturday night. You will never see the same show twice.