It’s not often you can say Morgan Freeman sparked a life-changing epiphany.

But that’s exactly what happened for Marly Quincoces ’06, MS ’08. Well…sort of.

“Marly Q.”, as she is affectionately known, has always had the inclination to give back to her community. As a student, she founded FIU’s Relay For Life and expressed during an exercise at LeaderShape (a leadership boot camp in Illinois she won a scholarship to attend) that her vision for the future was “to create a world where people actively respond to their innate desire to be kind and of service one another.”

After graduating, Marly worked for the American Cancer Society, the City of Doral and later founded her own event production company, StarMar Events.

But it wasn’t until watching Evan Almighty six years after attending LeaderShape that it all clicked together. 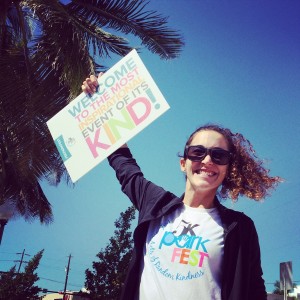 That was the exact moment she realized how she would fulfill her LeaderShape vision of creating a better world by practicing kindness. Not three months later, Marly launched PARK project with a mission to Perform Acts of Random Kindness (PARK) through events and community service.

PARK Project’s signature event is the annual 5k PARK Fest, which launched in 2011 as a run/walk to benefit service men and women. However, two years ago, Marly realized this event could become something bigger by opening the walk to benefit all types of causes. She also saw it as the perfect opportunity to unite the community by utilizing her event planning background to make fundraising fun and easy.

Now, the 5k PARK Fest is a revolutionary event where participants are encouraged to “PARK” for a cause of their choice and run, jog, or walk in support – all while enjoying a fun, festival-like atmosphere. Its goal is to take the event planning process out of the equation, and in turn create the opportunity for participants to focus on recruiting members for their team and fundraising for the cause they are passionate about.

This year the FIU Alumni Association has created a team in support of student scholarships and we’d love for you to show off your Panther Pride by joining our team – or creating your own! You can also represent the FIU community by becoming a volunteer.

Interested in joining our team, creating your own or volunteering? Click here to learn more and make a difference!

For every registration, PARK will donate half of the registration fee to the team’s cause of choice.