Several snowfalls didn’t stop FIU Panthers this week in the capital city as President Mark B. Rosenberg and advocates presented the university’s priorities to Congress and celebrated 50 years of federal partnerships this week. 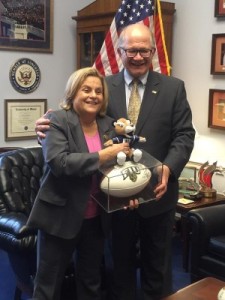 Graduate Medical Education (GME) This past Tuesday, March 3, President Mark B. Rosenberg traveled to Capitol Hill to present FIU’s federal priorities to the Florida delegation. In more than eight meetings, including with both Senators Bill Nelson and Marco Rubio, Rosenberg and Vice President of Governmental Relations Michelle Palacio updated the delegation on the impact of federal financial aid and detailed some of the university’s key priorities, which include:

For more information on all of our federal priorities, visit the Federal Priorities document page.

Front and center is the need to increase the maximum Pell grant award and also a return of the second Pell that was available to FIU students prior to 2011. Currently, nearly 20,000 FIU students are on Pell grants and 50 percent of those are at the level of greatest need. When the second Pell award was eliminated in 2011, FIU students lost more than $10 million in federal aid.

The meetings were followed by a reception overlooking the national mall with key Congressional champions, administration alumni and national partners. Together they celebrated FIU’s 50 years of impact.

President Rosenberg gave a few remarks thanking FIU’s federal partners and emphasizing the progress the university has made since its founding 50 years ago. Attending that evening were Senator Marco Rubio and Congressman Carlos Curbelo – both of which spoke of their pride for what FIU has become in such short time. 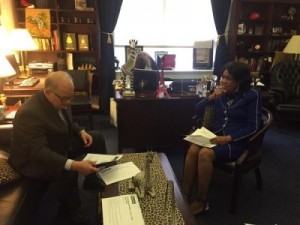 “I am honored by the opportunity to serve my community in Congress and look forward to working with FIU, its alumni and advocates to advance its priorities in Washington. It gives me great pride to represent 43,000 Panthers who live in Florida’s 26th Congressional District,” said Curbelo.

Representing the administration were key alumni and friends from the State Department, Departments of State, Housing and Urban Development, Commerce, NOAA, U.S. Coast Guard and many Hill offices. The event had an added air of electricity on the heels of the historic visit by President Obama to Modesto A. Maidique Campus last week.

The FIU in D.C. team, FIU Office of Engagement and the FIU Student Government Association were invited to present to Mexican students working in The Washington Center for the spring term. The presentation centered on what makes advocacy successful and best practices for community engagement. The FIU representatives were Nicole Kaufman, interim vice president for Engagement; Carlos Becerra, director of Federal Relations; Alexis Calatayud, SGA president; and Pamela Pamelá, Federal Relations intern.

FIU in D.C., Panthers in town from Miami, and FIU alumni residing in the area attended The Cuban-American National Council (CNC) leadership celebration at the Library of Congress this past Monday, March 2. Now in its 13th year, CNC is an FIU partner and is recognized as a bipartisan forum attended by more than 400 top decision makers and guests from government, corporate America and the non-profit sector each year.

Panthers Spotted this week in D.C.