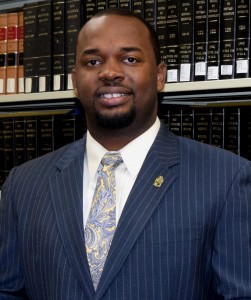 The Florida International University Alumni Association will be honoring Gordon Murray, Jr., Esq. ’08 with the Charles E. Perry Young Alumni Visionary Award on Saturday, March 28, 2015 during FIU’s fourteenth annual Torch Awards Gala. This award is presented to an alumnus/a who has made great strides in the early stages of his/her career.

As the first black attorney ever hired by the Florida Justice Association (FJA), Murray, Jr. made his mark on history at an incredibly young age. Murray, Jr. has garnered the respect of his peers at the FJA, an association dedicated to Floridians and their plaintiff lawyers, by setting them on a course focused on dealing with issues of diversity and inclusion. He singlehandedly formed the Membership Diversity Committee and created and hosted the FJA’s Inaugural Diversity Reception that was attended by over 200 lawyers, politicians and judges. He was also responsible for creating the inaugural “Diversity Week at the Capitol” which featured members from all over the state gathered to lobby on behalf of important issues. At FIU he was a President’s Scholar, two-time Homecoming King and an Excellence in Civic Engagement Medallion of Distinction recipient. He earned his juris doctor from Florida State University where he was a Mason Ladd Scholar and a Calvin Patterson Scholar and was bestowed the title Chief Justice Emeritus.

His tenacious work ethic, compassion for others and astuteness of the law led to his being named the youngest fellow in the Inaugural Florida Bar Leadership Academy with a raving recommendation from the Chief Justice of the Florida Supreme Court. In addition, he is on the Board of Directors for the Tallahassee Symphony Orchestra, is the youngest member to be accepted into Leadership Tallahassee and was recently selected as one of FSU’s “Thirty under 30.” Outside of the legal world, Murray Jr. is a life member of Alpha Phi Alpha Fraternity and serves as president of the Innovative Community Engagement Foundation.