“When I walked across stage at commencement, I knew where I was going,” shared Lorena Estrada ’10.  But her focused direction wasn’t developed overnight. Born to a Greek mother and Nicaraguan father who were always watching the evening news, Lorena knew from a young age that her compass pointed to journalism.

As a University student, Lorena strategically mapped out her plan to prepare for life after college and, ultimately, a successful career in journalism.  She wrote for FIU’s student newspaper, The Beacon, and enrolled in internship after internship, focusing on how she could develop and perfect her reporting skills.  She thought out of the box, asked questions and valued lessons from her professors — specifically one lesson by Professor Neil Reisner.

In Professor Reisner’s Multi-Ethnic Reporting class, Lorena was assigned a project that would forever influence her life.   The assignment was to observe and blog about an unfamiliar community or culture.  While most of her fellow classmates looked at south Florida’s diverse community as the subjects for their projects, Lorena navigated to the Pinecraft neighborhood of Sarasota, home to a large Amish community.

Lorena was befriended by an Amish family who shared their culture and lifestyle, which heavily emphasizes forgiveness and reconciliation.  On the heels of the 2006 West Nickel Mines School shooting at a Pennsylvania Amish schoolhouse, Lorena received an insider’s view of this tragic event and how the Amish overcame this tragedy. While the Amish community strives to avoid publicity, she knew the heart of her story was the community’s grace and ability to forgive, despite the grave tragedy that affected their community — a lesson she still holds close to her heart today. 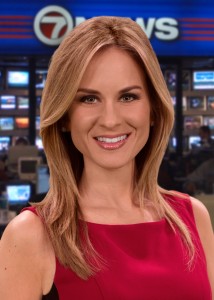 Her hard work and determination quickly got the attention of her peers and professors. As a result, Lorena received the competitive Scripps Scholarship, which allowed her to intern at any Scripps station in the country. This was yet another perfect opportunity in which she could grow from.

Lorena spent her weekends working on her demo reel, editing her resume and fine tuning her cover letter.  When she would send her reel and resume to news directors, often times she wasn’t asking for a job, but rather for feedback.  During this time, Lorena remembered a lesson she learned from her parents: “If someone thinks you aren’t ready, find out what you need to do to be ready.” In turn, Lorena used the feedback she received as motivation and polished the areas she needed to work on. This tactic proved fruitful because just one month before her graduation, Lorena was offered a job to join the CBS affiliate in Knoxville, Tennessee as a reporter.

Fresh from graduation, Lorena was off to Knoxville — yet another destination that would forever influence her life.  It was at WVLT in Knoxville where Lorena further perfected her skills as a multi-media journalist by being able to shoot her own footage, write copy, edit and report stories.

Once again, it was not long before Lorena’s talents and determination caught the eye of her peers and news director.  As a result, she was quickly promoted to the station’s weekend anchor.  Through this experience, she fell in love with the southern charm of the city, SEC football and one of Knoxville’s residents — whom she would later call her husband.

Over time, her work at WVLT had other major news markets at full attention. Four years after her graduation from FIU, she got word of an opening at WSVN and, in January of 2014, made her way back to sunny south Florida and joined their team as a general assignment reporter.

“It’s great to be back in Miami, I love this city and I’m proud to be part of such a great news organization,” shares Lorena.

4 Responses to “Lorena Estrada ’10: From Student to Journalist”