DNA finding could have major implications for conservation

Scientists have discovered what they believe to be a new species of hammerhead shark, prompting concerns about the species’ vulnerability and whether conservation practices in place today are widespread enough to protect them.

The bonnethead, a small species of hammerhead shark found in the United States, Bahamas, Caribbean and Latin America, has been considered abundant, productive, and widely distributed. However, when scientists recently sequenced the DNA of what they believed to be bonnethead sharks in Belize, they were shocked to find that they are likely an entirely different species based on large genetic differences between them and other bonnetheads in the region. 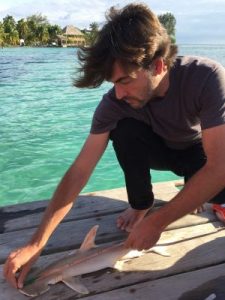 “Now we have to define the range of each of these species individually and assess them independently against where the potential threats are,” said FIU marine scientist Demian Chapman, who is the lead researcher of the team making the discovery. “For example, there are published reports that bonnetheads have nearly been wiped out by unregulated fishing in Brazil. We do not know which species this is and our finding of a new species in Belize highlights that there could be more undescribed ones out there, each one facing a unique set of threats.”Currently, the International Union for the Conservation of Nature lists bonnetheads as “Least Concern” for extinction risk, in part because they are described as a single species spread across a large area. The discovery that there might actually be two species with smaller distributional ranges and overall numbers means scientists must reassess each of their extinction vulnerabilities.

Currently, Chapman is leading a global shark survey project, Global FinPrint, a Paul G. Allen initiative that brings together an international research team and collaborators around the world to fill a critical information gap about the diminishing number of sharks and rays. Identifying abundance and diversity of species in a given area are critical components of this work.

While it can be difficult to determine when one species becomes two, a trait that defines this process is the end of interbreeding between the two groups. The DNA analysis conducted by Andrew Fields from Stony Brook University enabled the team in Belize to estimate bonnethead sharks around the nation stopped interbreeding with those from Mexico, the United States and the Bahamas several million years ago. Over time, genetic differences accumulated between the two groups. While their appearances haven’t changed, their DNA definitely has.

The data that lead to this definitive finding was obtained in part during a 2016 shark tagging expedition, funded by a grant from Louis Bacon’s Moore Bahamas Foundation.

“Discoveries like this have the potential to significantly advance shark conservation efforts and underscore the need for increased protection,” said Louis Bacon, founder and chairman of The Moore Charitable Foundation and its affiliates. “We are delighted by this finding and commend the research team on their important work.”

Bonnethead sharks are commercially fished in the United States, throughout the Caribbean and in South America. Currently, only the United States has strong management measures in place for the species. While the team is conducting genetic surveys of bonnetheads in the Caribbean and are focused on formally describing and naming the new species, they point out that continued efforts in DNA sequencing of sharks and rays throughout the world is likely to uncover even more unknown species. Currently, citizen scientists can aid the Belize expedition team by participating in a volunteer program hosted by Earthwatch, a global environmental non-profit organization that supported the research.

“The research team’s discovery of a new shark species is a testament to how much we still need to learn about the world we live in,” said Earthwatch CEO Scott Kania. “While we can’t anticipate breakthrough findings as profound as this one, Earthwatch is committed to connecting citizens with scientists who seek to understand and conserve our planet.”

The research team that made the finding includes scientists from Stony Brook University, Florida International University, University of North Florida and the Field Museum of Chicago.