Escape to another dimension full of mystery, magic and danger with science fiction author, Lala Elizabeth Tudor Hassenberg ’13. Combining her love for law, literature and fantasy, Lala delves into an adventure-filled world, taking readers on a perilous journey through time and space. With twelve published books in Russian and more on the horizon, Lala plans to release English language versions of her novels in the near future.

How would you describe your years as an FIU student? What were your goals?

My FIU years were my best student years. I remember my classes with professors Henry Rhea, Lisa Stolzenberg, Carleen Vincent-Robinson and Tim Goddard. I have especially fond memories of professor Oscar Vigoa. His classes were amazing! He is a great lecturer and I took three of his classes – White Collar Crime, Corrections and Global Terrorism. My goals were to learn more about Criminal Justice and the Law System of the United States, to be able to realize my career goals and use the gathered information for my future books.

What is your favorite memory as an FIU student?

My favorite memory as an FIU student was my graduation day. The commencement ceremony was amazing! I was also connected to the books. I like reading a lot and FIU’s library gave me a great opportunity to find and read interesting and rare books.

As both a lawyer and an author, can you share a little about your career journey and how you ended up where you are today? How did you get involved in these seemingly different professions? 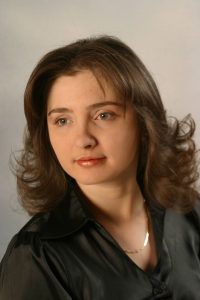 There are a lot of lawyers who author law books. Lawyers are writing about law, and writers often write about justice and human life. So, at first glance they appear different, but writers and lawyers have something in common.

Since 2007, I’ve been working on my historical fiction series, Saros, which consists of thirteen volumes. Saros follows twelve heroes, all of Jewish ancestry. Each book explores the life and adventure of one of these heroes. In the final volume, Key of Solomon, all the heroes will meet and save the world with the mystery of Cabbala.

What drew you to science fiction and fantasy writing?

The mysteries of space have always caught my attention. Since discovering that we are not alone in our Universe, I started to ask myself questions, such as: Where did we come from? Why are people the only rational creatures on this planet? Could we travel to different planets and find other civilizations? All of these questions gave my imagination free reign and I devoted myself to fantasy writing.

How does your work as a lawyer influence your writing and vice versa?

The plots of my books are taking place in different parts of the world and the Universe, some of them in the United States, in the future and past. Knowledge of law helps me write about criminal trials, not only in the far past, but also in the future. I even describe the first criminal trial in space! Some of the heroes in my novels are New York City police officers; others are investigators or galactic patrols. Having knowledge of law and the Criminal Justice System has helped me a lot.

So far, what accomplishments are you most proud of and why?

If you could go back, would you change anything about your years at FIU?

As you know, every writer has his or her own world. Many writers are living in two worlds – present and imaginary. And sometimes, it is difficult to communicate with real people. In their own world, writers are the commander of every situation; in the real world, they are soldiers of fortune. I am not an exception. Many years of creativity changed my character; I started to communicate only by necessity. I know that networking is very important, but while working on my books, I tried not to communicate much with people. It distracted my thinking and destroyed the world in which I lived in a process of creation. During my FIU years, I did not talk much with my classmates. If I could, I would advise myself to communicate more and make more friends.

Do you have plans for another book on the horizon? If so, what themes will you be exploring?

Currently I’m working on my historical fiction series, Saros, and am planning to publish the forth, fifth and sixth volumes – Boris Grossman, Abbas Alekperov and Lucio Rossi.

Are your books available to English readers?

My books are written in Russian and are available on Amazon. English versions of my books have not yet been published, but I’m planning to do this very soon.

Do you have any advice for students looking to get the most out of their time at FIU, both professionally and personally?

I would advise students to pay close attention to their classes, but also to communicate and make friends.

To learn more about Lala, explore her author page on Amazon and visit her official website.