The FIU men’s soccer team played its first home matches of the season over the Labor Day weekend, defeating Wisconsin in their home opener on Sept. 2 and settling for a scoreless draw against Niagara on Sept. 4.

Sophomore forward Santiago Patino scored the lone goal for the Panthers in Friday’s win over the Badgers, taking advantage of a turnover in the box and firing a shot past the goalkeeper in the fifth minute of play.

The Panthers defense was able to keep the Badgers at bay for the remaining 85 minutes of play, holding Wisconsin to just four shots on goal.

Two nights later, the Panthers returned to FIU Soccer Stadium to take on the Niagara Purple Eagles and outshot the visiting team 20-2, but could not find the back of the net.

With a record 2-1-1, the Panthers will travel up state this weekend for a match against North Florida on Sept. 9. The Panthers will return home Sept. 17 to open up Conference USA play against Kentucky.

For more information on FIU men’s soccer, go to FIUSports.com. 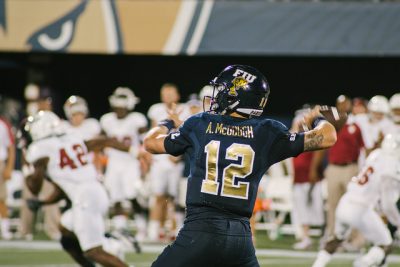 The FIU football team kicked off its season Sept. 1 against the visiting Indiana Hoosiers at FIU Stadium, but couldn’t hold on to a late lead in a 34-13 loss.

After three quarters of play dominated by both defenses, the Panthers headed into the fourth quarter with a 13-12 lead after kicker Austin Taylor converted a 29-yard field goal for the Panthers.

But the Hoosiers offense came to life in the fourth quarter, scoring 22 unanswered points to win the game.

The Panthers (0-1) will host its “white out” game this Friday, Sept. 9, against the Maryland Terrapins. The first 10,000 fans at FIU Stadium will receive a “Friday Night White Out” t-shirt. Kickoff is set for 7:30 p.m.

For more information and promotions, go to FIUSports.com.

In the fifth and final set against Southeastern Louisiana, junior outside hitter Taija Thomas – who led the Panthers with 15 kills for the match – helped FIU clinch the win with four kills in the final stanza.

The Panthers improved their record to 2-4 with the win and will face Nicholls State as part of the UNF Invitational on Sept. 9.

For more information on FIU women’s volleyball, go to FIUSports.com.

A late goal by the Miami (Ohio) Redhawks doomed the FIU women’s soccer team in a 1-0 loss on Sept. 4 at FIU Soccer Stadium.

With the game scoreless with five minutes left in regulation, a header by Redhawks junior Shae van Gassen found the inside of the far post to score the game-winner for Miami (Ohio).

The Panthers fall to 0-4-1 this season and will travel to UCF on Sept. 8 in hopes of picking up their first win of the season.

For more information on FIU women’s soccer, go to FIUSports.com.