Most graduates get flowers or a nice dinner to mark the occasion. But Craig Del Mundo had something even more romantic in mind.

Del Mundo, an FIU grad who received his bachelor’s in Information Technology in 2013, wanted to surprise his girlfriend of five years, Danahlyn Tamola – who was set to receive her master’s of Business Administration from FIU (she had previously earned a bachelor’s in Psychology in 2011)– with an engagement ring.

His choice of proposal location? The Green Library at Modesto A. Maidique Campus. The pair had met on the second floor years earlier, after mutual friends invited Del Mundo, then a recent transfer student, to their hangout spot in order to welcome him to FIU.

Del Mundo enlisted the help of family and friends, who lured Tamola to the library after the commencement ceremony had finished. He then got down on one knee and asked his best friend if she would spend the rest of her life with him.

Tamola couldn’t have been happier with his decision to propose in the library. 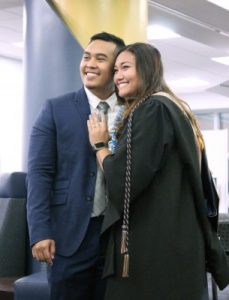 “After the proposal, I confessed to Craig that this whole time I wanted him to propose in the library because we had so many wonderful memories there,” she says.

With radically different majors, they didn’t share any classes, and since they lived far from each other, the library “became where we really got to know one another,” adds Del Mundo.

In fact, the first picture they took together was in the library.

It’s not just the library, but FIU as a whole that is important to them. In Tamola’s eyes, FIU means growth.

“I’m not the same person as I was when I started as a freshman in undergrad, and I’m proud of the changes in my life since then.”

FIU is also where she and Del Mundo forged lasting friendships along the way, and many of the people who witnessed the proposal were friends they met at FIU.

Now the pair is looking toward the future, planning on establishing their careers and saving for their wedding. As alumni, they retain library privileges, so they might make time to check out some books as well – love stories, of course.