Staff Sergeants Charmaine and Jean Fortune met at the Robins Air Force Base in Georgia, got married and pursued a shared dream of becoming nurses. Air Force Sgt. Alan Brailsford struggled with substance abuse for years and plans to help others on the path to recovery, as a social worker.

In addition to answering the call to serve their country, all three share a commitment to changing lives and are receiving their degrees from FIU this summer. They are among almost 3,800 FIU students who will graduate during seven ceremonies on Aug. 7, 8, 9 at the FIU Arena, 11200 SW 8th Street in West Miami-Dade County.

“We are proud of the men and women of FIU who have sacrificed to serve our country,” said President Mark B. Rosenberg. “The love of country and dedication these FIU patriots have demonstrated shine through in their commitment to using the skills they learned at FIU to make a positive impact in the lives of others and in our world.”

As a teenager in the Philippines, Charmaine Fortune cared for her terminally ill grandmother. This experience inspired her to pursue a career in nursing, so she enlisted in the U.S. Air Force to pursue a healthcare career. While juggling a full-time job as a military medic, she also was a full-time pre-nursing student. Excelling in her studies, she received a full scholarship to FIU’s Medic to Nurse program, which helps veterans and active duty personnel with military medical training pursue a bachelor’s degree in nursing. Fortune, 26, and her husband will both be stationed at Fort Sam Houston Joint Base as 2nd Lt. Air Force nurses. The Fortunes will graduate with bachelor’s degrees in nursing on Monday, Aug. 8, 2016 at 10 a.m.

After high school, Alan Brailsford enlisted in the Air Force. He served as a medic in the intensive care units and emergency rooms of surgical wards and clinics. After leaving military service, he decided to come out as a gay man. His parents were compassionate and understanding, but society was not as accepting – and he turned to alcohol and drugs. With the support of his parents and brother, and through a 12-step program and volunteering, he was able to overcome his disease. Brailsford, 55, has been sober for eight years and plans to spend the rest of his career in social work helping others cope with addiction. He will graduate with his master’s in social work on Monday, Aug. 8, 2016 at 3 p.m.

This semester’s graduates also include the first classes of two new graduate programs, in emergency management and psychology. The two inaugural classes are from the master’s program of the Academy for International Disaster Preparedness and the Clinical Science Doctoral Program in Child and Adolescent Psychology. 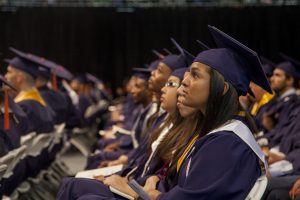 During the ceremonies, a group of standout students will be recognized as Worlds Ahead graduates. In addition to Charmaine Fortune and Brailsford, they include:

During the commencement ceremonies, the following community members will be honored:

Commencement speakers will be: