The paths of volleyball standouts Yarimar Rosa ’10 and Natalia Valentin ’11 have been intertwined from early on. The Puerto Rican natives occasionally played together for their country’s youth national team as teenagers, but mostly they were rivals from different high schools that would challenge each other in volleyball several times a year.

So when the time came to decide where to play collegiate volleyball, Valentin recognized that joining forces with her one-time competitor might make the most sense. In fact, Rosa had the same idea. She had just finished her freshman season at FIU and reached out to Valentin about the possibility of playing together in Miami.

Soon the pair would be standing on the same side of the court – and making FIU history. Together at the university for three seasons, they helped propel the Panthers into a volleyball powerhouse in the Sun Belt Conference during some of the program’s best years. Rosa and Valentin were instrumental in helping the Panthers reach the NCAA Tournament two years in a row and compile a 79-19 record in their three shared seasons at FIU (2007-2009).

Rosa’s power helped her become arguably the best player in the program’s history, setting the all-time FIU record in kills (2,083), or non-returnable plays, and earning All-American honors three times during her collegiate career. Much of her success would not have been possible without Valentin, who set up many of those signature Rosa kills and shattered the all-time program record for assists with 4,413.

On a personal level, the bond between the two grew stronger, and they maintain an ironclad friendship that makes them nearly inseparable today. A part of them longs to relive the old college days.

“We wish we were back at FIU,” Valentin laughs. “Miami gave us the best. We’re grateful to have gone to FIU.”

Their time under FIU’s former head coach Danijela Tomic also helped instill in them values and principles that have helped them thrive in their professional careers today.

“We learned a lot of small details that make you grow as a person and as a player,” Rosa says. “You need to be so disciplined, make sure you do your work in volleyball and in school. If you need to work on something, you don’t wait for the coach to tell you to do it. You do it on your own.” Valentin adds, “That prepared us for the professional life, in volleyball and in life.”

Now they are getting reading for something really big. 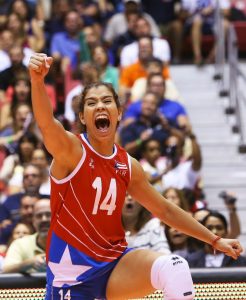 After being instrumental in FIU’s turnaround, the couple sought to do the same for Puerto Rico’s women’s national volleyball team.

Each found success at the club level in Puerto Rico. Playing on separate teams, Rosa was named the Most Valuable Player of the Puerto Rican Women’s Volleyball Superior League in 2012 and 2015, and Valentin won the award in 2014 while also winning Setter of the Year three consecutive seasons.

But at the national level, the two had a chance to do something very special – and on the same side. Over the years Puerto Rico’s women’s team earned moderate success in regional and international tournaments but had never qualified for the Olympics. Rosa and Valentin were on a mission to change that.

“Volleyball is a growing sport in Puerto Rico,” Valentin says. “It doesn’t get the attention of other sports like basketball.”

In late May, the team was fighting for the final available berth into the 12-team Olympic tournament in the upcoming 2016 Rio Olympic Games in Brazil. Their hopes came down to the final game of the World Olympic Qualification Tournament. Energized by playing at home in front of a capacity crowd of approximately 9,000 at the Roberto Clemente Coliseum in San Juan, the team swept opponent Kenya in three sets to secure a historic victory.

With the small Caribbean island facing serious financial crisis—the debt-ridden, self-governing U.S. territory has instituted a series of punishing austerity measures in recent years—Rosa and Valentin and the rest of the women’s national team provided their nation with a much-needed reason to celebrate.

“During that week we brought everyone together,” Rosa says. “As an athlete, this is all you want. You train all your life and everything you do is to make it to the Olympics. All these sacrifices are worth it when you qualify for the Olympics, to have the chance to represent your island in a big tournament.”

Once they arrive in Brazil, the Puerto Ricans will have little time to revel in the moment. On Aug. 6, the day after the opening ceremony, they will play their first match against the team that the International Federation of Volleyball ranks No. 1 in the world: the United States.

“We’re the underdogs and we want to surprise people,” Valentin says, reflecting upon the chances of an upset. “Either way, this is an experience we’re going to share and cherish forever, something we’ll tell our kids and grandkids.”