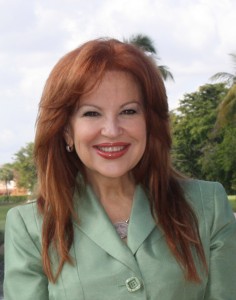 Bettina Rodriguez Aguilera ’79 is a well-known public servant, community activist, entrepreneur and innovator. After going to school full-time and working full-time, Bettina successfully graduated with her BS in Social Work.

Bettina perfectly showcases the resilience and driven nature of the FIU Panther. In this interview, you’ll learn a bit about her FIU journey, her professional achievements, and how it’s all tied together.

How would you describe your years at FIU?
It was an exciting time. I had graduated from Miami Dade and was ready for my next step. During this time, I got married and graduated five months pregnant of my daughter, Bettina Inclan, who later also graduated from FIU, and later my son Samuel Inclan also attended.

FIU understood the balance of working full-time and going to school full-time while having a family; that was comforting and allowed me to get through it. It was difficult but the encouragement from the professors helped me to continue on. I graduated as a professional and ready to conquer my future.

What is your favorite memory of being a FIU student?
The sense of belonging to an institution that I felt proud of. I remember going from building to building seeing the surroundings and saying this is my university, my community, I belong here.  Also the feeling of being part of an international community, the students and clubs from all over the world, the activities, the library.  I believe this opened my curiosity of exploration and travel to other cultures and societies. Seeing the world as my backyard and not just what I had been exposed to growing up in Miami.

Where has life taken you since graduating from FIU?
So many things have happened since my graduation I started working as a social worker in Miami Dade County, then as an administrator at the County Manager’s office. After 17 years of working for government, I started my own business and became an international speaker and trainer. I developed over 14 courses and have worked for counties and corporations. I lived abroad in Albania developing an international Democracy mission, in Costa Rica and other parts of the world. My business also assists other businesses understand the many programs that our country provides in incentives and contracts. I started a non profit, The New Women Entrepreneur Center, that I lend for seven years, where we assisted over 600 (mainly minority women and men) to start and develop their businesses. Later I created the University of Miami’s first Hispanic Leadership program. After suffering a family issue, I came back to the states and was hired to develop the office of Economic Development for the City of Doral, where I created the current business plan, marketing materials, business census and web site. After five years I resigned as Economic Developer, ran for office and became a Councilwoman and then the Vice Mayor. This year I restarted my consulting and public speaking business and also created the Women Studies Program for Miami Dade College and the first Women Empowering Leadership 16-week certificate program.

Specifically, how did FIU prepare you to get where you are professionally?
FIU gave me the opportunity to earn a diploma, to become a professional and the ambiance opened my eyes to the world around me.  The professors encouraged me and believed in me when it was hard to balance life.  I will always be grateful for that.

Why do you feel it is important for alumni to stay engaged/connected with FIU?
FIU is our foundation, the fabric that makes us a community — no matter where we are, we are one. We, the alumni, have the experience, we feel the sense of family when we hear someone is also an alumni and feel that connection.  A college campus is much more then the buildings that are standing, it is the culture, the memories, the ability to transcend boundaries.  We, as alumni, are FIU and we owe it to ourselves and future generations to pass on that pride.

What advice would you give to current students and/or young alumni?
This world is becoming more and more intense. It is demanding more of us; there are many distractions and uncertainty is in all the media that is competing for our attention. More the reason to stay focused and earn that degree. When you have a diploma it says something about who you are.  That you are willing to stay in there and make it through, that you believe in yourself and have put your money and your time to prove it.  It is not a guarantee of success but it is a key that will open many doors that are less likely to be reachable if you do not have that piece of paper.  You believe in yourself enough to show the world you are a success, you earned it.

It is not easy out there, living in a global community has its positives and negatives but you already proved it to yourself that you can, and that is 90% of success.