Over 200 professionals and students attended the 2nd Annual Black Professionals Summit held on Saturday, September 12th, 2015 at Florida International University, making it another successful year of learning, networking and engagement. 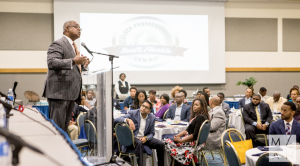 This year’s keynote speaker was Bill Diggs, President of the Mourning Family Foundation. Bill Diggs gave a heart-felt speech filled with personal stories detailing his path to success and reminding those the grind does not stop. He encouraged those in attendance to believe in themselves and the key to success lies in themselves: “All it takes is all you got.” In addition, providing them tips about never coming back home with all the business cards in your pocket and stressing that networking is vital to success because the wealthy never stop networking.

The Summit also featured the “Economics of Politics” panels moderated by Marlon Hill, Esq., with esteemed elected officials in the State of Florida such as State Senator Oscar Braynon II, Miami Dade Commissioner and Board Chairman Jean Monestime, Miami-Dade County School Board Member Dr. Dorothy Bendross-Mindingall, Mayor Oliver Gilbert III, North Miami Councilman Alix Desulme, and State Representative Shevrin Jones. The panel covered the panelists’ reasons for running and how did they get their start, in addition providing the top issues for 2016 that the black community should focus on. School Board Member, Dr. Bendross-Mindingal informed those in attendance that we must keep our eyes on “education, safety, jobs, housing and voting” and informed the audience that high school students within the county will be able for the first time case their votes at several high schools in the county. State Senator Oscar Braynon II also gave words of encouragement for those who were interested in running for office to research and review politicians with effective strategies. Mayor Oliver Gilbert added that there are plenty of politicians and not enough public servants, seek to be a public servant.

The Summit was first established in 2014 and led by Kenasha Paul, Founder and CEO: 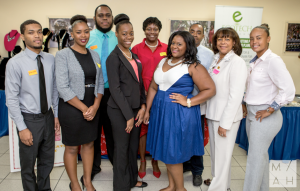 “I started the Summit while in law school to as a solution to bridge the wealth and education gap in South Florida and nurturing viable black businesses. Not too many people can say they come from a family that has a lineage of lawyers, doctors and accountants, etc., I know I could not as I would have been the first attorney in my family. When we as a people pursue our dreams and goals, we are too often starting from scratch without real guidance and support. The Summit serves to bring industry leaders within our community to pull that knowledge and resources together in order to be a helping hand.”

Attendees received headshots by EmpowerMarket to update their LinkedIn and had a wide-range of workshops to choose from. Some workshop highlights included Young Professionals Network of Miami’s Millennials Life Crisis panel that featured young rising professionals sharing their deviation from the traditional life model and providing tips to young entrepreneurs such as The Man in 3B, movie Director, Trey Haley. 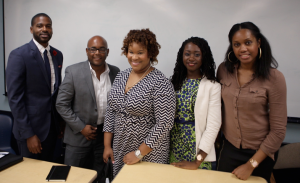 Additionally, the ‘Diversity in Tech’ panel which featured major game changers in technology such as James Jones, Jr., CEO of Court Buddy; Mary Spio, CEO of NextGalaxy, and Brian Brackeen, CEO of Kairos. In addition to the ‘Spend Time with Your Money’ panel hosted by the Henderson Financial Group and moderated by Mayor Oliver Gilbert II providing financial and wealth management tips.