FIU alumna Ashley Wojnar ’10 began her education at FIU with the hopes of creating a circle of long lasting friends. Although she grew up in Miami and was deeply ingrained in the community, she wanted to make new connections and expand her network. As a student, she was involved in SGA and also took part in a local dance team.

During her last two years at FIU, she focused-in on her goals and was encouraged by FIU faculty to pursue valuable internships which shaped her future career growth. Majoring in public relations, her first internship was for the radio station Y100, followed by an internship doing PR for Miami Children’s Museum and finally, during her last semester at FIU, she was the PR intern for the Adrienne Arsht Center. According to Ashley, “I couldn’t have gotten to where I am without my education from FIU.”

Thanks to the hard work she put into these three internships, Ashley was able to make a splash at her first post-collegiate job, doing PR for Impact Publicity. Pollo Tropical was one of her primary clients and they were so impressed with her work ethic that they brought her on board to handle in-house marketing for Naples, Tampa, Orlando and Gainesville. Ashley continues to make an impact at Pollo Tropical and now serves as the Marketing Supervisor for the great Lone Star State. “I made my way to Texas almost a year ago, and since then have opened 19 stores in Texas, and have handled all of the events and sponsorships for the Dallas, Houston and San Antonio markets.” 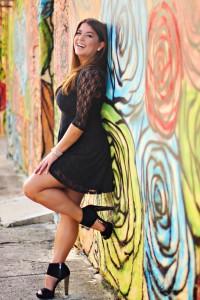 When asked what advice she would give to current students, Ashley shared, “Although you learn a lot in the classroom, there is nothing like learning hands on. FIU gave me the opportunity to receive credit for my internships and encouraged me to do as many as possible.”

Ashley understands the importance of staying engaged with FIU and that life is all about the connections you make along the way. According to Ashley, “I get so excited anytime I meet someone from Miami in Texas, and even more so someone who went to school at FIU. You automatically feel like family, and especially when you’re in a brand new state and don’t know that many people, it’s a piece of home …and that feeling is priceless.”

Ashley is now partnering with the FIU Alumni Association on several of the Pollo Tropical grand openings. On August 21, the Houston Panther Network participated in the League City grand opening party. It was celebrated all day long with a ribbon cutting, robosurfer charity challenge, calypso music, free chicken for a year giveaway, free meals for the first 100 people in line, face painting, balloon twisting, and much more. It was a huge success with many more openings in the works.