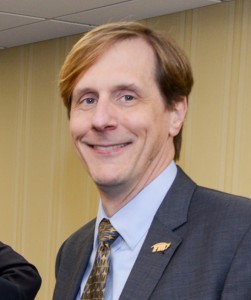 Dr. Laird H. Kramer, Ph.D. will be the recipient of the Outstanding Faculty Award on Saturday, March 28, 2015, during the FIU Alumni Association’s fourteenth annual Torch Awards Gala. The award highlights a faculty member who has made a lasting impression on the lives of FIU alumni. For more than two decades, Dr. Kramer has done just that by demonstrating singular devotion and loyalty to the Florida International University community and student body.

Currently a professor in the Department of Physics, Dr. Kramer is also the Director of the STEM Transformation Institute at FIU. His approach centers on active student engagement, starting with the unique modeling instruction platform he implemented in the physics department more than 10 years ago, which grew the number of physics majors from about 30 in 2000 to nearly 200 in 2014. In 2010, Dr. Kramer led an effort to recruit and educate a new generation of science and mathematics teachers and simultaneously acquired a $1 million grant from the Howard Hughes Medical Institute (HHMI) for FIU. His most recent accomplishments include the award and launch of FIUteach, a $1.45 million UTeach replication grant that will lead to training over 60 science and mathematics teachers annually at FIU, and the award of his second HHMI grant, a $1.5 million project that will implement active learning across sciences and mathematics courses for all STEM majors. He is also the founder of the Physics Education Research Group, a university engagement initiative that pursues new methods in teaching. He was named the driving force behind FIU joining the National Science and Mathematics Teacher Imperative, which is operated by the Association of Public and Land Grant Universities.