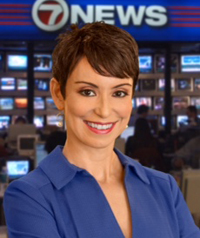 The Florida International University Alumni Association will be presenting Belkys Nerey ’89 with a Distinguished Alumni award during FIU’s fourteenth annual Torch Awards Charity Gala on Saturday, March 28, 2015. This award recognizes alumni who have brought honor and distinction to the university through their notable record of service and achievement in a particular discipline, organization or cause.

An Emmy Award-winning journalist, Belkys Nerey shares her genuinely lighthearted spirit every night as the co-anchor of 7NEWS at 5, 6, 10 and 11 p.m., alongside Craig Stevens. She joined WSVN as a general assignment news reporter then spent several years as co-host on the popular Deco Drive before landing in the big chair as main anchor for South Florida’s news station. During her 20-year tenure at Miami’s WSVN, Nerey has covered major news stories such as the exodus of tens of thousands of refugees on rafts from Cuba, as well as the threat of military intervention in Haiti. She was also sent overseas by her station to cover major world events such as Prince William’s wedding and the deaths of both Princess Diana and Pope John Paul II. Bilingual, fashionable and sharp, Nerey has become an emblem of Miami.