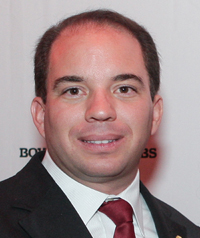 The Florida International University Alumni Association will be honoring Alex Rodriguez-Roig ’99 with the acclaimed Community Leadership Award Presented by The Center for Leadership at FIU during the fourteenth annual Torch Awards Gala on Saturday, March 28, 2015. As the inspirational president of the Boys & Girls club of Miami-Dade, Inc., he will deservingly receive this award meant for an individual who has demonstrated exemplary service and civic involvement in his or her community.

Rodriguez-Roig has been part of the Boys & Girls Club of Miami-Dade movement since he initially joined in February of 1996. As president, he oversees five clubs that serve an estimated 8,000 children on an annual basis. His clubs provide the community an overall economic impact totaling $78 million in income generations and savings. Prior to filling this role, he served as academic director for the organization where he developed Academic Improvement Methods (A.I.M.), a comprehensive educational enhancement curriculum to improve academic levels of children in after school programs. In streamlining Boys & Girls Clubs of Miami-Dade’s youth programming, he has helped the clubs to improve their services to children and reduce their expenses. He is currently leading plans for expanding Boys& Girls Clubs of Miami-Dade’s capacity to serve more youth at the new South Beach Club, as well as the Hank Kline and Northwest Clubs.

Rodriguez-Roig serves as treasurer on the board of directors of the Florida Alliance of Boys & Girls Clubs, which has been instrumental in bringing over $36 million to Boys & Girls Clubs throughout the state of Florida. He also serves on the National Latino Advisory Council for Boys & Girls Clubs of America and is a board member of the South Florida Workforce Youth Council. In April 2012, he was appointed to the Florida International University College of Education Advisory Board and in 2014 was named a Lifestyle Media Group Up & Comer in the Nonprofit category. He was also named to South Florida Business Journal’s 2013 40 Under 40 list. Additional awards and accolades include the 2005 Top 100 People of Like Minds by Florida International Magazine, the Florida Marlins’ Heart of the Community Award in 2005 for his work in the community, and the 2005 New Executive of the Year by Boys & Girls Clubs of America. Rodriguez-Roig exemplifies what it means to be an FIU Panther through his unwavering dedication to the improvement of the South Florida community and passion for bettering the future of its youth.

This year, the FIU Alumni Association will be hosting the prestigious gala at the Fontainebleau Miami Beach Hotel, located on 4441 Collins Avenue in Miami, Fla.