It’s easy to agree that one of the least desirable parts of self-service gas stations is having no choice but to handle an unsanitary pump. FIU alumnus, Antonio Lyon ‘09, certainly shares in that sentiment.

Fuel nozzles are one of the most widely used public surfaces and, therefore, are highly contaminated with a variety of transmissible germs. In order to cushion this necessary evil, Lyon created U-Glove, Inc. – a company that produces dispensers of disposable and recyclable gloves for gas pumps.

Taking a proactive stance on public hygiene and protecting the consumer’s health at gas stations is at the core of U-Glove’s goal of “bridging product innovation with public health awareness, through the simplicity of human touch.”

It was FIU’s political philosophy professor, Orlando Gutierrez Boronat, who showed Lyon the importance of effecting changes on the macro level by starting within one’s own life and community. This lesson on perspective was not lost on Lyon during U-Glove’s conception.

“As I started building U-Glove, I always saw an opportunity to build a great organization from the ground up, which would create jobs and make a positive dent in our society and communities, while giving me the chance to provide a better future for my family, “ expressed Lyon. 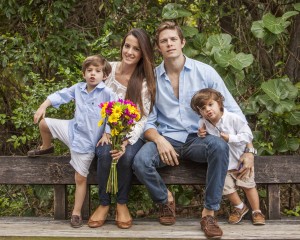 FIU’s academic objective is to adequately prepare its students with the qualities and tools necessary for success. Undoubtedly, FIU did just that by playing a role in shaping Lyon’s life and, consequently, his business endeavor. Lyon proudly shares that his experience at FIU gave him the resilience, courage and confidence he needed to bring his idea to life.

Now, Lyon is setting his sights on leaving his own positive footprint on society. Through U-Glove, he hopes to create a healthier public environment and create jobs, while simultaneously transforming the advertising industry into one with purpose.

When thinking of advice to share with current students, Lyon emphasizes the importance of flexibility: “Be like water. Don’t let previous experiences or current perspectives get in the way of your success. Your future does not depend on the person you’ve been, but on the person you can become and ultimately what you’re meant to be.”

4 Responses to “U-Glove: Because Our Alumni Care”