[vision_dropcap style=”text” color=”navy”]A[/vision_dropcap]fter a late afternoon thunder storm resulted in a muggy rush hour commute, it felt more like a humid day in South Florida, rather than a crisp evening in New York City. But it was going to take a lot more than a little August shower to keep the Big Apple Panthers from enjoying a night of baseball fun in one of the most historic stadiums in professional sports.

On August 22, nearly 70 FIU alumni, family and friends roared into the Bronx to attend the first-ever FIUNYC Night @ Yankee Stadium, hosted by the Greater New York Alumni Chapter. The event gave attendees a unique opportunity to network with FIU alumni from New York, New Jersey, Connecticut and Washington, D.C., while experiencing the excitement of “America’s Pastime,” as the New York Yankees took on the Chicago White Sox in this, Derek Jeter’s final season in pinstripes. 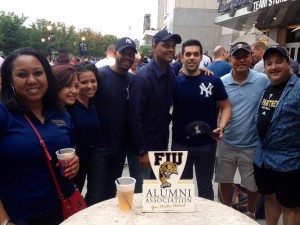 The evening got under way with a lively pregame social event held at the Hard Rock Café’s outdoor patio. FIU alumni in attendance ranged from a Class of 1980 grad who made the move to New York more than 34 years ago to a member of the Class of 2014 who arrived in the Big Apple less than a week before the event. However one of the most interesting Panthers in attendance took all his classes from the comfort of his home in New York City.

Ramon Cordies, a semi-retired associate construction project manager and proud Panther who worked for 21 years in the NYC Department of Citywide Administrative Services’ Bureau of Design and Construction, obtained his MS in Construction Management via FIU Online. While he was unable to attend the Worlds Ahead event held at the Plaza Hotel in April, he was thrilled to finally have an opportunity to meet some of his fellow FIU alumni. “It was very good, I’d even say awesome, although I think I was one of the oldest persons in attendance,” joked Cordies, who completed his online degree in 2010.

Attendees learned more about upcoming chapter programming and volunteer opportunities from members of the FIUNYC leadership team and received a special visit from Duane Wiles, associate vice president, alumni relations & executive director of the FIU Alumni Association. Wiles personally made the trip to show his support for FIUNYC Night @ Yankee Stadium and thank the alumni in attendance for giving back to their beloved alma mater, as a portion of the proceeds from all ticket sales benefited the FIU Alumni Center. As a special thank you, all FIU alumni in attendance received a limited-edition New York Yankees/FIUNYC cap.